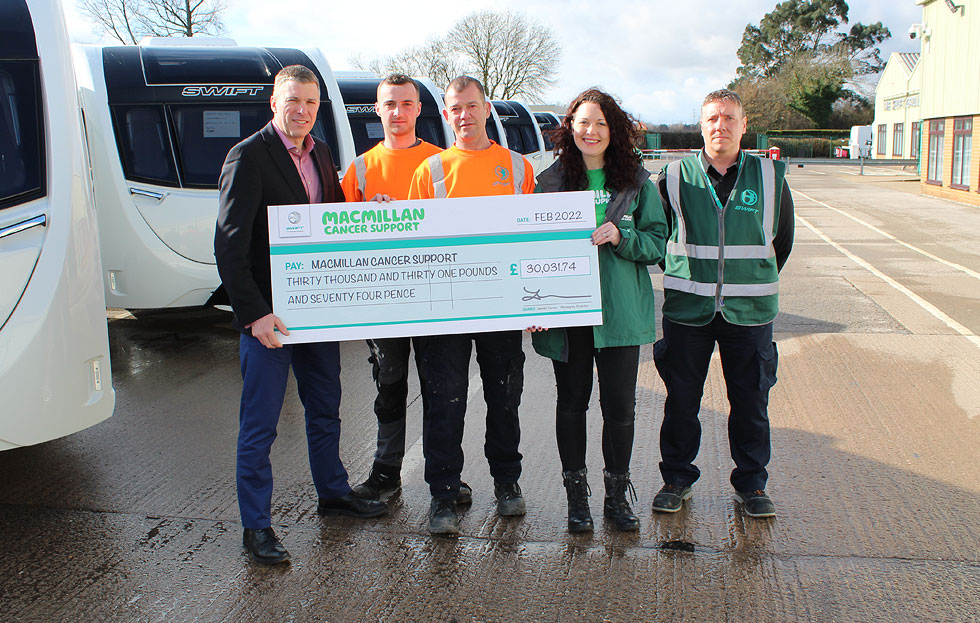 Since 1995, Swift Group has donated to Macmillan through a recycling of goods scheme, whereby damaged or unsellable items are purchased by staff members, with monies coming to charity. The company has also previously donated to Macmillan by hosting Macmillan Coffee Mornings and ‘dress down days’, and an incredible £100,000 has been donated in total over the past 27 years.

The UK’s largest manufacturer of caravans, motorhomes and holiday homes, Swift’s recent donation of £30,031.71 tipped them over the £100,000 mark.

“Any kind of redundant or surplus materials that we have in the factory – which could be anything from offcuts of wood, which employees often use for firewood, or any slightly imperfect items, like a scratched microwave – that can’t be used in final products; employees have the chance to purchase them. They then take that home knowing money is raised for charity.

It also includes samples or prototypes and even scrap metal. Sometimes returning these to suppliers are a big admin task or are simply unwanted so, rather than scrapping them or putting them into a skip, which obviously isn't great for the environment, it all gets put into a pot, so to speak.

We have employees who have had family that have been helped by Macmillan. Pretty much everyone is affected directly or indirectly by someone living with cancer, so everyone here at Team Swift understands the importance and meaning behind this scheme.”

“It’s an absolute pleasure to support Macmillan’s incredible work. After learning what this means for the many invaluable services that Macmillan provide in our local community, we’re immensely proud of this donation total.”

“We are so grateful to everybody at Swift for their incredible continued support. The total amount raised is truly staggering and will go directly to help people living with cancer through many of our Macmillan services. This money could help people living with cancer who are struggling with the rising cost of living, particularly their energy bills. At Macmillan, we have given out £55,000 to support vulnerable patients in Yorkshire and the Humber with heating bills in just the first eight weeks of this year alone. We couldn’t do this without the generosity of our wonderful supporters, as we are funded almost entirely by donations from the public.”